Showcasing the Filmmakers of Tomorrow, Today.

Full festival pass to all movies directed by women.

This year we bring to you the festival to house , on your screens.

From the comfort of your home

Access all films / interviews at any time of the day.

Unveiling exclusive interviews with our panel of women in film.

With the Full Festival Pass /Day pass, you’ll get early access to incredible films — but not just any films. Each one was written, directed, or produced by a different woman in the industry. That comes in at just over a dollar per film. It’s like the Redbox days but better. Because you’ll also get to pick their brains with exclusive, behind-the-scenes interviews with each of our featured filmmakers.

What do we have for you?

You wouldn't want to miss out on the "Trailer"

With the Full Festival Pass, you’ll get early access to 40 incredible films — for all 4 days and access to exclusive interviews as well.

With this pass, you’ll have access to a seat at the table with some of your favorite women in film for a virtual discussion. You’ll have the chance to network and make new friends in the industry, speak one-on-one with some of the best in the business, get early access to all 40 films at the festival, and a few other surprises from our sponsors in digital swag bags. 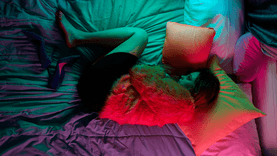 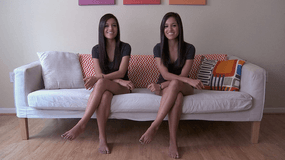 Twenty-three-year-old Alice seems to be in perfect health. However, the slightest movement causes her huge pain. Even grannies in their late nineties are in better shape than she is! But this wretched pain is invisible and no one takes her seriously. Alice is alone, too alone. Until she encounters Gina.

But You Look So Good -

As a young woman realises her sexual needs have grown beyond her relationship with her boyfriend, a chance encounter allows her to take control of her fantasies.

Identical twins, identical lives...but will it last forever? This is the question at the heart of Shelby Hadden’s playful documentary following a set of young twins in Austin as they navigate college, careers, dating and more while being virtually inseparable.

For the cute Hind, sex happens always on the first date. Except with the romantic Moktar, the kind they don't make anymore. He gives her a surprising ultimatum : they'll only have sex provided he dreams of her ! With serious methods, Hind steps up to the crazy challenge. It isn't just about one-night stands anymore, but about rediscovering desire and maybe love. 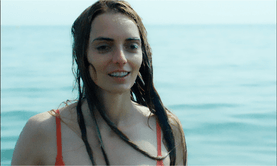 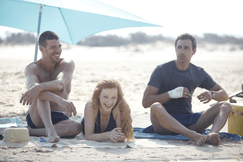 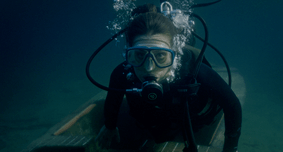 A film shoot at a seaside resort out of season. Everyone has left for the weekend, except Coline. She likes men, partying, and everything that glitters. Jesse, her dog, follows her everywhere, on the film set for work, beside the sea for fun.

At 17 years old, Amaryllis and Margot have conquered together most of teenage battles and adolescent pleasures. Shirley Temple is about them, but also a tribute to women’s friendship at all ages.

An unexpected encounter with his past threatens Yuval's summer vacation with his family in their temporary paradise.

Justine searches for solace at her late mother's cottage. When she comes across an old scuba suit, she decides to explore the bottom of the lake. 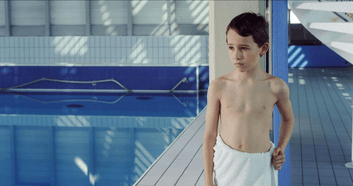 This Is You And Me -

Claire lives a quiet life together with her loving husband, Victor, and their teenage daughter, Sara. Recently Claire doesn't recognise her daughter anymore.

One night in Auburn, New York, Marie meets Susie. Sensing each other's urge for a night of recklessness and spontaneity, the two immediately hit it off. They share a strong connection, but the night takes a turn when Marie triggers an unexpected reaction within Susie. 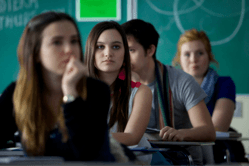 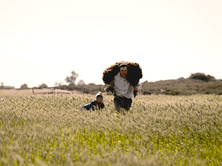 In the early 2000s, following her return from a long stay abroad, Amélie invites her friends, Maude and Pascale, to a cottage. In a disturbing and isolated forest, Amélie tries to reconnect with her friend Maude, while the rivalry between her and Pascale takes a dark turn.

When the 17-year-old Kayla discovers that she is pregnant from her now ex-boyfriend, she spirals down into a life of drunken parties with life-changing consequences.robo

Mohamed is deeply shaken when his oldest son Malik returns home after a long journey with a mysterious new wife.

China, 1997. An unhappy marriage, a love affair and a child who holds all the secrets. 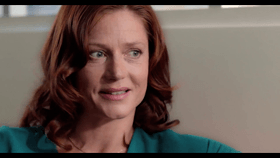 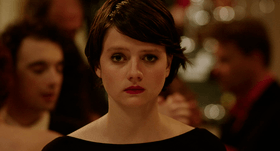 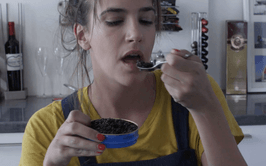 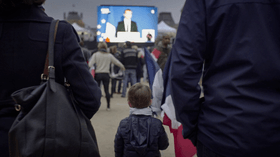 Six characters, single or in couples, either in search of the great love or in denial of love, cross paths and discuss their fears and their desires... We'll gradually discover how much their words are distorted by their frustrations and their need to please…

Today, Julie is strong, She is independent. She can go back home. Her family is waiting for her, they love her : her mother, her brother, her sister... and her father.

Charlie and Léo have been together for five years, but one day he confesses he is now involved with her best friend Camille. Charlie seems to take it as well as can be expected, but then wreaks her ingenious revenge.

Paris, 7th of May 2017, day of the results of the french presidential elections. During this historic evening, the paths of four people intertwine while Europe is divided. 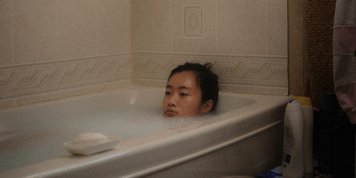 No Crying At The Dinner Table -

A collection of family secrets, confessions and confrontation.

Sweet Mother Of Mine -

A mother is afraid of confronting her own mother who has never acknowledged her as her daughter.

After a violent family argument, Jude decides to leave home and go live with her elder sisters Margot and Sarah to discover the wilderness of their daily lives. 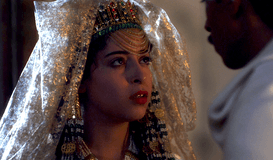 Sami and Axel live in the same housing project. Sami tries hard to create a happy, playful environment for his little girl to grow up in. Axel is a trickster, in his work and private life. Sami and Axel are neighbors. They don't know each other. Until one fateful morning…

Delphine, a caustic portrait of power dynamics in our society, describes the journey of a young Lebanese girl who, in her own way, rises up against the intimidation she was subjected to as a child. Delphine is an ode to childhood, but also an examination of the wounds it can cause.

Dream With One Eye Open -

An impressionistic portrait of an autistic girl who creates an artistic world populated with one-eyed characters through whom she expresses her joys and her tears.

Right after their wedding, a young couple has to discover love for the first time. The weight of tradition on their wedding night makes the first step painful, frightening, exciting and violent at the same time. The young wife knows neither the sexual act nor the man she just got married with. Clashes in which are competing impulses, traditions and feelings are expressed without a word being told. 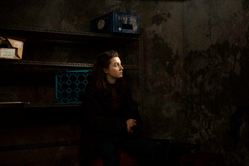 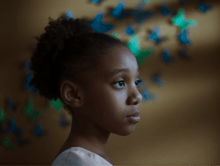 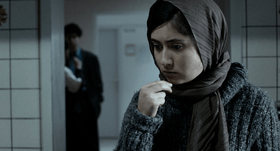 Madeleine, a war reporter, is covering a zone of armed conflict. One night, Mazen, a citizen reporter, bursts into the hiding place where she is working.

Mahalia, a timid 9-year-old black girl, feels different from the other girls in her ballet class. Hoping to boost her confidence, her mother brings her to the hair salon to get her hair straightened for the very first time.

In a world in which gender roles are reversed, a young male producer has to decide what to do when assaulted by his powerful female boss.

Parvaneh is a young Afghan immigrant who recently arrived at a transit centre for asylum seekers in the Swiss Alps. The only things she has got to know yet are the rural area surrounding the centre and the centre itself. 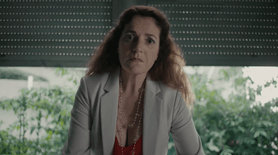 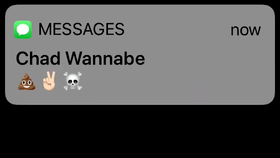 For the third time, a woman returns to see her employment counselor, in order to obtain the paper allowing her to unlock her bank account.

Your Pizza Is Outside -

Simon Archer blames his problems on a Tinder match while ordering Papa John's for delivery. Your Pizza is Outside is a suspenseful comedy about an incel named Simon Archer. "Incels" feel discriminated against by women for not sleeping with them. Simon Archer indicts feminism, gender equality, and left-wing politics as the cause for his feelings of inadequacy. Simon is violent. He lauds other "incels," including Alek Minassian, for their lonely sacrifice of suicide and organization of mass killings. People like Simon Archer exist. Simon represents a genuine terrorist threat to you and me. Simon is also a lonely human being, suffering. 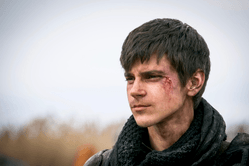 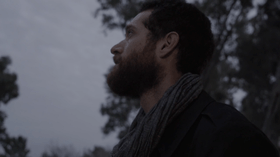 Daniel, 16, is convinced that the end of the world could come tomorrow. He is preparing himself physically and mentally for the Apocalypse by following the advice of Randall Wallace, an American survivalist.

The Man Who Knew A Lot -

Mister Beranger works in a big furniture store. His life seems perfectly settled, until one day he gets promoted to the mysterious thirteenth floor...

In a near future, the brain chip 'Reality+' acts on your sensory perceptions and allows you to see yourself with the perfect physique you've always dreamed of. All the people equipped with the chip can see your new appearance and you can see theirs. But the chip can only be activated for 12h a day...

A man visits someone in the hospital, but ends up reflecting on much more. 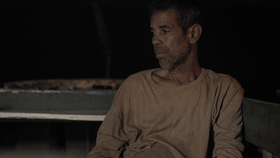 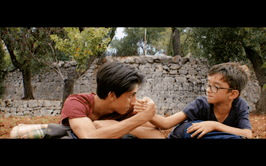 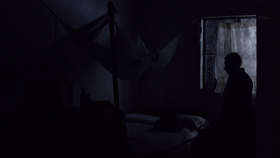 A young girl finds a little boy tied up in an abandoned house on her family's land.

Tomás, a humble Cuban fisherman, is having a harsh winter at the open sea. For the sake of his family and against all odds, he needs to capture a fish tonight.

And We Stood Still -

Giovanni and Ernesto run away from their unloving mother in search for a better life. They walk with only their backpacks and a map through the wondrous region of Puglia, Italy. They search for their aunt, in a place they have deemed as the "City of Dreams", but some dreams, aren't what they seem.

Veronica travels to a town in the jungle to look for her daughter. Once she gets there, she meets other people also looking for their relatives. 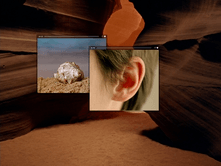 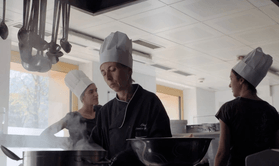 Hybrid short film on the concept of wonder.

On her regular day at work, Paola starts to feel that she is missing out on something exciting.

MiniFlix is a streaming service that offers a wide variety of award-winning movies, TV shows, anime, documentaries, and more. Watch anywhere anytime on your phone, tablet, laptop, and smart Tv.